NRA certified instructor Orville Deutchman has been reloading his own ammunition since the early 1970s. Beginning with necked rifle cartridges, his knowledge and expertise expanded into pistol, rifle, and a few wildcat chamberings. As his gun collection grew, he would accumulate the tools, brass, parts, and equipment to assemble the ammunition for the new gun. He’s proud to say that he hasn’t purchased a “factory load” in 20+ years.

In addition to assembling all of his own cartridges (currently more than 30 chamberings), Orville is also an avid lead bullet caster, with countless molds, many for each gun he owns. The ability to create inexpensive lead bullets is key to reducing the cost of ammunition. The projectile is always the most expensive of the reloading components. 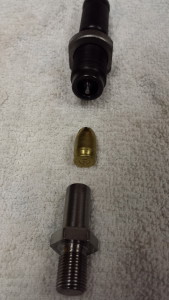 In recent years, Orville has also acquired equipment and tools to allow him to produce jacketed bullets, using pistol and rifle cases as the donor jacket material in a swaging operation. For example, he uses 45 ACP brass cases and installs a lead core, and then swages the assembly into a .500 S&W Magnum bullet, which weighs exactly the same as a Hornady XTP hollow point. The performance is also exactly the same, thereby saving the cost of buying expensive bullets (the commercial ones are $.50+ each.

Orville is an NRA certified instructor (instructor #163237136) and provides one on one class instruction, as well as larger format classes. The classes are tailored for the student(s), and can be provided at Orville’s reloading studio, at your location, or in cooperation with one of several area reloading supply shops. Typical students range from those with no hands on experience or knowledge whatsoever………  to experienced reloaders, looking for additional skills. Orville has provided instruction, and certificates, to several commercial (Class 6) FFL ammunition manufacturers.

Orville moved to the Daytona area of Florida, from Maine, in 2013. While living in Maine, students attended his classes from all six New England States (ME, NH, VT, MA, CT, RI). Since relocating to Florida, Orville is proud to state that students have sought him out eagerly, and have come from all parts of Florida (Tampa, Key West, Orlando, Tallahassee, Jacksonville, etc), as well as from South Carolina, Georgia, Mississippi, and Louisiana. See the Accolades Page to find out what makes Orville’s classes so special.

Additionally, Orville was previously one of the Instructors for WeaponCraftTraining in Maine. Between that experience, and Orville’s additional NRA certifications, he is able to provide handgun training suitable in Florida for Concealed Carry Permits, and can also provide additional levels of self defense handgun training. Having a permit isn’t enough. You need the skills so that when the time comes to use your carry gun, you know how to do that effectively. Call today to book either your concealed carry permit class ($80) or additional handgun training ($60 an hour) – 386-753-8898.